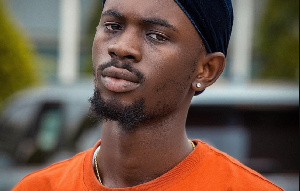 • Black Sherif recounts how he lost his first girlfriend

Popular Ghanaian rapper, Black Sherif has disclosed how his first girlfriend died from a strange illness while they were in Senior High school.

In a yet-to-be-released interview with Pulsegh where he revealed aspects of his private life, Black Sherif said there was an instance where his school was plagued with a strange illness and his then-girlfriend fell a victim.

Black Sherif said his girlfriend was among the many students who could not survive the strange illness.

When asked whether he intends to give another relationship a chance, Black Sherif who says he is currently single said;

“Charley life hard, but you know say life for Accra be harder. So if I go take girl wey me I dey street. I no get nothing. If I go take girl then they come dey bill-bill me or something, I go stress more. So rydee I for just focus and talk to girls. I no dey date them.”

Asides his decision to stay away from women, Black Sherif also disclosed that he currently does not drink or smoke.

“I don’t do drugs and I don’t do alcohol. That craft is just for the clout, you feel me. To complement the song, the attitude and everything. Ibe craft,” he concluded.

Next Deputy Governor, Elsie Awadzi gets Glitz Africa Corporate Temperament of the 12 months...

Footballers are good in bed than macho men