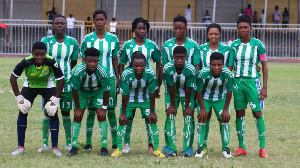 Hasaacas Ladies are the reigning Champions in Ghana

The Ghana champions were 3-1 winners at the 30 June Stadium Friday evening to match Wadi Degla’s earlier 3-1 victory over AS Mande.

Hasaacas Ladies and Degla are now on the same points and goals after their first Group A games.

Yusif Basigi’s charges went into the break with the one goal cushion.

The second half turned out to be a cagey one as Malabo Kings pushes for the equalizer without success.

Pepertual Agyekum delivered magic in the 85th minute when she scored directly from a corner kick. It was helped in by Chinasa’s poor goalkeeping.

Malabo Kings pulled one back in the 90 minute through Stephanie Drepoba after goalkeeper Grace Banwaa mistimed a corner kick.

Eventual woman of the match Badu wrapped up Hasaacas Ladies’ victory with the third in second minute of stoppage time. He calmly placed the ball into the net from a cutback.

Hasaacas Ladies will play against AS Mande while Malabo Kings come up against Wadi Degla on Monday, November 8 in their second group games.

Numerous musicians declined to attribute on my tunes – Nana Ama

Mr. Drew walks off stage during performance at Wildaland Festival

Afia Schwar Trolls Mona Gucci for Lying About the Queen Calling her Right after...