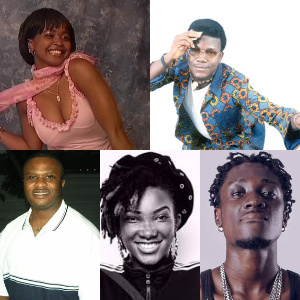 Who should take the blame for the number of people killed by bad roads? Fixing roads in Ghana must be a priority.

The deaths of prominent people in Ghana may still be ruled by some as a result of careless driving while others may attribute it to the bad nature of roads.

Ghana has come a long way since independence and road accidents remain a major issue our people have to deal with. The number of lives that have been claimed as a result of bad roads in Ghana is appalling.

The “Poulele” hitmaker Terry Bonchaka in October 2003 passed on through a car accident.

After bringing into the scene a new dance that was to take the world and not just Ghana by storm, the entire country woke up in the morning to news of his death.

Actress Suzzy Williams at age 23, passed on in a fatal accident. The young actress was almost at the peak of her career when all was cut short in 2005.

The actor died in 2008 after an accident on the Accra-Tema Motorway in his Toyota Camry. His car had run into a cargo truck ahead of him and was pronounced dead at the Korle-Bu Teaching Hospital.

Kwame Owusu-Ansah appeared in about 60 movies before his death in 2008.

Ebony Reigns was killed instantly in a traffic collision on 8 February 2018 whilst returning from Sunyani to Accra after a visit to her mother. Her assistant and longtime friend Franklina Yaa Nkansah Kuri and soldier Atsu Vondee were also killed in the fatal accident.

The deaths of celebrities like Terry Bonchaka, Suzzy Williams, Kwame Owusu Ansah, Ebony and Vybrant Faya could have been avoided and their life’s preserved if our roads were maintained.

At the peak of their careers, these talented personalities departed in a very painful and ruthless way. Our government may have to feel the need to fix roads with potholes and fix or service street lights on major highways and roads.

Fixing our roads will stop our thirsty roads from claiming more cherished citizens because Ghanaians are tired of crying. Our development as a nation must have good and safe roads as a basic necessity.

GhanaWeb throws a challenge to the Minister of Roads & Highways, Kwasi Amoako-Attah to make a difference before his tenure ends. Close all potholes, tax the local government to involve residents in building accessible roads to places drivers refuse to go; for the fear of damaging their cars and help save and protect lives.

For this reason, GhanaWeb has organised a Road Safety Walk Campaign to create awareness about road safety and interact with drivers.

“Join us on the 27th of November, 2021 for the GhanaWeb Road Safety Walk to create awareness about road safety and interact with drivers.

The start point is the Presbyterian Boys High School to Delish Restaurant at East Legon.

Tears Stream as Ebony’s Mum Visits her Tomb on 3rd Death Anniversary of her...