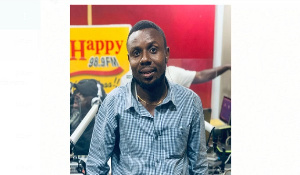 Film writer and Director, Martinezz, has suggested that the authorities set aside a specific day each year on which presenters all across the country will be celebrated.

Speaking on Happy FM’s Showbiz Xtra with host, Doctar Cann, he stated that if there is anything like a hall of fame, it should not only be about musicians, actors and the like but also about presenters, producers, managers and all other people working behind the scenes.

According to Martinezz, there are certain figures in radio and television who have done so much that their impact and their names cannot be downplayed, however, they seem not to be celebrated enough and that is not the best.

He also reported that even the first broadcaster to ever be on the radio in Ghana is someone worth celebrating however, there is no proper documentation that we have on him to celebrate him.

The film director advised that it would be a very great initiative if people who do the underground work for our known celebrities to be recognized are also celebrated at least once a year.

We will power govt to make buildings get the job done in the innovative...