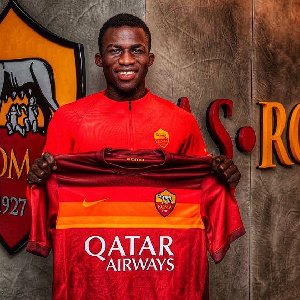 • Afena-Gyan was last week invited to the Black Stars

Italian football club, AS Roma have refused to release their young attacker, Felix Afena-Gyan to join the Black Stars for the upcoming 2022 World Cup qualifiers.

Afena-Gyan was handed his debut Black Stars call-up by coach Milovan Rajevac last week during the announcement of the squad.

However, moments after the announcement, the player’s manager, Oliver Arthur took to social media to welcome the offer but also stated that the player was on a development program, adding that the call-up may have come a little too soon.

“Congratulations @ohenegyanfelix9 @ edmundAddo, two outstanding young men from the @ArthurLegacy family who have earned call ups by @ghanafaofficial for World Cup qualifiers. “Player development is a partnership that cannot be rushed.

In the latest update, however, it has come to the notice of GhanaWeb.com that the Italian club are unwilling to release the player for the games to be played in November.

Sports Journalist, Saddick Adams in a tweet stated that, “Roma Director Tiago Pinto spoke to the Ghana FA. Afena’s camp argues he needs some time to settle at club. He’s ready to play for Ghana Flag of Ghana but timing not suitable.”

Afena-Gyan was expected to join the Black Stars in camp ahead of their departure to South Africa on Tuesday, but the player did not turn up.

Pastor, 2 others jailed for defying ban on gatherings