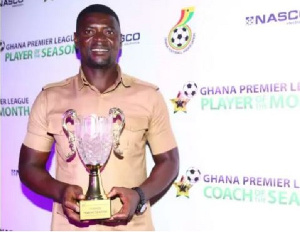 Accra Hearts of Oak Board Member and second majority shareholder, Frank Nelson has insisted that coach Samuel Boadu is still the best at a job in the entire country.

Coach Samuel Boadu has received some backlash in the media space for the last couple of days after Accra Hearts of Oak’s winless run in their last competitive games.

In the last three games of the Phobians, they were thumped 6-1 by WAC of Morocco in the CAF Champions League and a draw against Legon Cities and WAFA respectively in the Ghana Premier League.

But Frank Nelson says they won’t give their coach pressure because is early days yet and they know he can turn things around for the rainbow club.

” We have a very young coach who understands the team and luckily has been with us, he’s the current best coach in Ghana, for now, he’s still doing well. I don’t want to compare any other coach with him.”

“I believe our coach, Boadu has what it takes to lead the club, this is not anything, we are just trying to warm up and we will do it to the level everyone is expecting,” he told Kumasi-based Akoma FM in an interview.

Samuel Boadu was named as the best coach by the Ghana Football Association after winning the GPL, FA Cup, and Super Cup with Accra Hearts of Oak.

Dancegod Lloyd: The journey, struggles and the dream

‘Let us wake up,’ Rawlings fees Ghanaians to struggle Covid-19

Covid-19: 10 factors John Mahama & Akufo-Addo are entitled to some bash