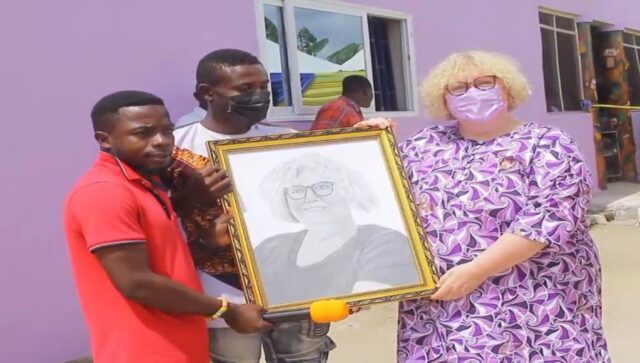 The facility, an educational and social institution, located at Agona Nkum, seeks to empower young mothers and their children through further education and skill acquisition.

The Central Region has one of the highest numbers of teenage pregnancies in the country with nearly 11,000 teenage girls made pregnant in 2020 alone.

At the commissioning of the facility, the couple, Rev. Dr. Kingsley Arthur and Barbara Arthur, indicated that they were prevailed upon by the Gender Ministry in 2017 to consider supporting the country to deal with the skyrocketing numbers of teenage pregnancies after the couple had enquired from the Ministry where they could invest.

The request by the Ministry followed the couple’s earlier visit to the Ministry of Gender, Children and Social Protection, inquiring from the Ministry where they could invest as part of their philanthropic work.

“In 2017, we had in our hearts to invest in our motherland, Ghana. We met with the Gender Minister who told us that they had a big need. They said the government would appreciate if we could do something to help young mothers.”

“The minister mentioned to us that Central Region has the highest numbers of teenage mothers or pregnancies. So, if we could be a blessing to the nation and help the young mothers, it would be better appreciated,” they said.

Rev. Dr. Kingsley Arthur, a Social Manager and an Economist, indicated that they want to undertake a humanitarian job and their idea would be a snowball system.

“We want to show love to humanity and do this humanitarian work. The idea is that it would be like a snowball system; somebody benefits and helps the other person to also benefit. We would get more people involved and it would reduce the social needs and challenges in the community.”

Rev. Arthur described the situation and conditions of the teenage mothers. “These mothers, usually, have no education or a limited one. They either have no profession or have dropped out of school. So, we decided to construct a home that would host these children to be protected, to be directed, and to be assisted with the upbringing of their children so they could go back school.”

He further explained that they would sponsor their education to go back to school or to learn some kind of vocation, while their children during the day would be made to attend kindergarten.

“The mothers during the day go to their school and in the evening, they are reunited with the children. We want to have a Montessori kind of education,” he explained.

Impression of Covid-19 on pubs and bars in Ghana