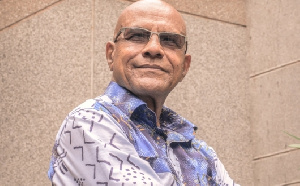 Veteran Ghanaian broadcaster Tommy Annan Forson also known as the ‘King of country music’ has disclosed that he has no professional media training nor university degree.

According to him, his education level was not up to the university due to financial crises his family faced and that his broadcasting career was self-taught.

He made this known on Y107.9FM’s Y Leaderboard Series with Rev. Erskine when he said, “I was not able to get to sixth form and I never went to the University due to financial difficulties so everything I do on radio was basically self-taught. My father put up a big house which took a lot of his money and unfortunately he passed on without leaving us much so I would do part-time jobs during a vacation to pay my school fees to complete at least form five.”

He continued that, after all these challenges he was able to come this far because his motivation was to focus on how to survive in life since he was the last born of the family and his elder siblings were not around during that time.

“I have always been a workaholic. My main focus was to move forward in life. We all die at a point in time but life has to go on. Was I going to sit down to watch for everything to get out of hands? I was always driven by the word focus. Being the last born of the family, I needed to do something to survive.”

Thomas Annan Forson is a doyen in broadcasting and radio presenting. He has won about 29 awards which include the Eminence award for his contribution to broadcasting in Ghana. He is the founder of Rabodef Radio Academy.

WAFA stay-wire Daniel Lomotey jets off to Tunisian to be part of unnamed club...

Euros On MGL: Germany come from behind to win thriller against Portugal