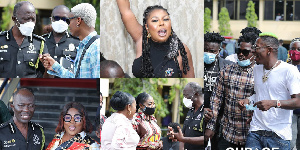 • Musicians, actors, entertainment journalists availed themselves for meeting with IGP

The Deputy Director-General of Public Affairs at the Ghana Police service, ACP Kwesi Fori, has disclosed some key areas that were touched on during their meeting with the creative arts sector.

It can be recalled that scores of Ghanaian celebrities were present during the IGP’s meeting with Creative Arts Industry players held on, Wednesday, November 10, 2021, at the Police headquarters conference room in Accra.

Although the meeting was held behind closed doors, the police after interacting with the celebrities addressed the media on some key issues that were discussed.

The four key issues were are as follows

The police have disclosed its intentions of ensuring the safety of celebrities by providing adequate security when the need arises.

“At the end of the day we concluded that the police will provide special security arrangements in terms of public events. We’ll make sure to protect the captain and leaders of the industry,” ACP Kwesi Fori said.

ACP Kwesi Fori said artistes have been asked to support the development of the country through contributions.

Although he did not disclose the agreement between the two parties, Mr. Kwesi Fori said, “We’ll make sure they contribute their quota to the socio-economic development of the country. We have had a discussion on that and moving forward some of the things we’ve talked about will be implemented.”

Actors and musicians present at the meeting raised various concerns regarding how copyright infringement is affecting their craft. They have highlighted the need for their intellectual property to be duly protected.

“Infringements of copyright issues will also be taken seriously. The police will support them because we know that there are various associations within the creative arts industry. We have taken note of that. And we will provide assistance that will be fashioned according to their needs and wants,” ACP Kwesi Fori told the press.

ACP Kwesi Fori also disclosed that the police during the meeting outlined various concerns with regards to the rampant misconduct that has taken over the entertainment industry.

“We also spoke about indiscipline issues we will want the creative arts industry to spearhead and direct the youth in better stead. Although the meeting was held behind closed doors, we have been able to iron out our differences to seek greater collaboration and cooperation. One beautiful thing about this meeting is about the free nature of the dialogue. We agreed to disagree but at the end of it all, we came out with salient points and facts that were going to deal with,” he stated.

4 relationships every 20-something should invest in