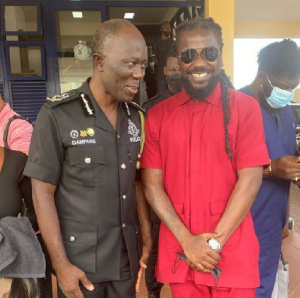 • IGP met with celebrities on Wednesday

• Samini has lauded the move

• The IGP has promised to resolve their challenges

The meeting came off on Wednesday, October 10, 2021, and witnessed celebrities in attendance.

Speaking to GhanaWeb at the Police Headquarters in Accra, Samini said the meeting was fruitful, adding that the IGP has pledged to support and address the challenges creatives face.

“It is a laudable idea that finally this table has been set for the Creative Industry to meet the police. It is long overdue that we set down and get to understand each other so we know what is expected of each other.

“I like how the IGP himself finally took charge and responded to the various issues and how he said he was going to deal with them individually. I believe that eventually if any change is going to happen from what we’ve just complained about it’s gonna be from what he’s promised. I like the fact that it was an open forum for us to express ourselves,” said Samini.

He added that he is yet to have any challenge in dealing with the police especially when it comes to security at his events.

“I haven’t had difficulties getting the police to come to my event. Usually, there is protocol, there are offices you need to go to, there are letters you need to send… if you do things ahead of time then you can be able to do things within the time you want to work.”

They Wished To Individual You But They Could not – Lovers Say As Becca...