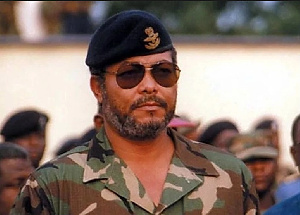 Azumah Nelson revealed that he wanted to join the Ghana Armed Forces as a young man, but his friend, the late Jerry John Rawlings, encouraged him to choose boxing as a profession instead of the army.

Professor Azumah Nelson spoke about his relationship with the former President in an interview with GhanaWeb’s Daniel Oduro during his 60th birthday celebration.

Read the full story originally published on January 31, 2006, on Ghanaweb

Former President Jerry John Rawlings has heaped praises on the World Boxing Council (WBC) Hall of Famer, Azumah Nelson for his tough sense of discipline and described him as a role model.

He said having seen Azumah’s exploits at the gym during his early days, he is very sure that the boxer was going to become a world champion. “I had seen them all and Azumah was just too good and he ended up proving us right.”

Speaking during a phone-in to ‘Personality Profile’ on Joy FM’s ‘Drive Time’ program hosted by Lexis Bill on Thursday evening, the former President congratulated Azumah as he attains the age of 60 in a couple of weeks, wishing him the best, with the expectation that when he turned 75 he would still be able to demonstrate to all that one can maintain his health and physical fitness through discipline and hard work.

Former President Rawlings also spoke with pride about the fact that Azumah had maintained his sense of humility despite his global stardom.

“As successful as he became, he didn’t allow that to go to his head. Azumah retained his humility. Some people would have been spoilt a long time ago but not this man (Azumah).”

Sounding poetic, the former President who mentored Azumah during his early days when the boxer used to train at the Air Force base, said the last time he saw Azumah, he felt good.

“He was looking good, he was looking fit, he was looking strong. Turning 60 and looking the way he was meant he was still holding on to his iron-heart discipline. He was taking good care of himself. He was not neglecting himself and this speaks volumes for the man’s character.

The former President disclosed that Azumah’s lifestyle at the time was a source of motivation to his career and that is what he needed to be able to achieve the ultimate.

An obviously overwhelmed Azumah who had referred to the former President as ‘daddy’ during the programme managed a ‘thank you’ as his mentor concluded his compliments and indicated that he would follow up with a visit on Friday.

In 2014 President Rawlings launched Azumah’s biography, ‘The Professor’ during which he stated that Professor Azumah Nelson almost single-handedly flew the kite of Ghana in the early days of the Revolution and brought so much joy to millions across the country. He said Azumah was an embodiment of the sense of purpose, sense of mission, and unity that had gripped the nation during the revolutionary period.