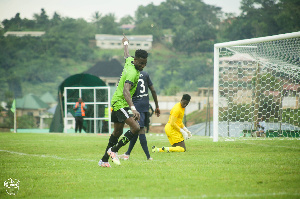 Agyenim Boateng scored twice with Husaif Ali adding another to propel Dreams FC to a 3-1 win over Accra Lions at the Theater of Dreams in Dawu.

Rauf Salifu scored the consolation for Lions who recorded their second consecutive loss in the Ghana Premier League(GPL).

Dreams had a perfect start when Huzaif Ali tapped in from close range, to put the hosts in front inside 12 minutes.

Agyenim Boateng increased the score after combining with Ali to cruise the Still Believe lads into a comfortable lead, 2-0.

Salifu pulled one back for Lions a few seconds after Dreams had doubled their lead. The young forward netted what is his second league goal of the season.

The first half ended with the home side leading 2-1.

The Green and Blacks started the second department on a good note, making incursions for a third goal to stretch the lead but their moves came to no avail.

Substitute Mohammed Aziz also came close to restoring the two-goal margin for Dreams in the 60th minute but his efforts went wide.

Eventually, the much-wanted third goal came in the 75th minute. Boateng grabbed his brace and his third of the season to cushion the lead.

Dreams then held on to secure their second straight win to move to third on the league log with 6 points.

Accra Lions, on the other hand, sunk into the drop zone with 1 point after three matches.

Assin North parliamentary case is far from over – Asiedu Nketia

4 arrested for unlawful possession and discharge of firearm