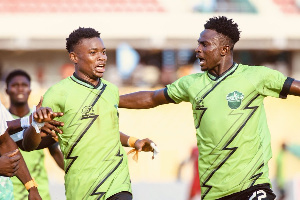 The Still Believe lads after going up by three goals in the first half bottled the lead to settle for a stalemate.

Fatawu left his mark in the game scoring a trademark long-range effort and a brilliant solo goal to complete his brace.

The U-20 AFCON best player calmly controlled a switch from the left side then cut inside before bending the ball to the far corner.

The 18-year-old danced his way through to the opponent goal area before firing into the roof of the net.

The teenage sensation has now scored in all the three games he has played for Dreams this season.

What I love about Fatawu Issahaku is he doesn’t score casual goals. All his goals are genuine goal of the season contenders.

Here are his two goals against Great Olympics over the weekend. pic.twitter.com/apURwtm5TS

It will be a huge shame to get pregnant before marriage