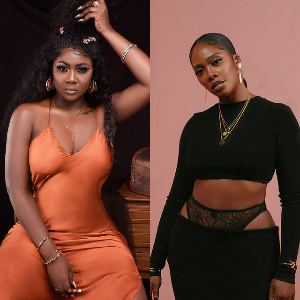 Salma, Tiwa Savage dance in a club in Turkey

Salma Mumin has showered Tiwa Savage with wads of money in the Turkish club.

In a video that has gone viral, actress, Salma Mumin was seen dancing to Tiwa Savage’s ‘Somebody’s Son’ and spraying stacks of dollars on the Nigerian musician.

Tiwa was performing her recent hit song in a fully packed club in Turkey when the Ghanaian actress walked up to her and sprayed 100 dollar notes on her amid cheers.

Netizens as expected had something to say about Salma Mumin’s show off.

One social media user cited Salma won’t spray her money on a Ghanaian artist ever while another added it was her money hence she can decide to spend it anyhow she wanted.

Quite recently, Tiwa Savage was humiliated when her sexual escapade was mistakenly leaked. The Nigerian artiste has remained strong and carried on with her job leaving despite the ridicule and trolls.

Salma Mumin, on the other hand, has been seen in business class flights travelling around the world and trying to promote her new clothing line.

‘God can use anyone to do His work’ – Ohemaa Mercy

Income Baggage: We have generated GH¢,12m in 5 months

Galamsey menace: The role of welding in the recovery process of Ghana’s polluted water...