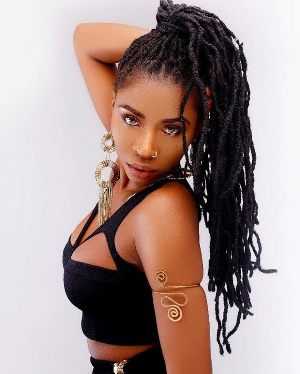 Talented vocalist, Akosua Kwakye, known in showbiz as AK Songstress has expressed worry over how Ghanaians have ignored her talent and craft unlike her other colleagues who have enjoyed much attention from the public.

Speaking in an interview with Roman Fada on Atinka Fm’s Drive Time Show on Monday, November 22, 2021, the Reggae/Dancehall artiste said since her emergence as a professional artiste, she has received little support from the media and key industry players.

According to her, she has really worked hard as an artiste and therefore deserves maximum attention and support.

She has released many great songs with videos but until her latest release, Jonathan which is arguably one of the biggest songs in Ghana, Africa and the world at large at the moment, she was still seen as an underground artiste.

“I have really worked, I have done many great songs but I have been underrated,” she said.

Disputing the opinions of some Ghanaians who believe that her songs are not good and marketable that is why she has been struggling to get attention, she said the problem has to do with Ghanaians not supporting real talents.

The beautiful songstress who believes her latest song, Jonathan which has been her biggest song so far said it wouldn’t have been bigger l if it was only in Ghana.

Collaborate with me if you want that dope record – Kwaw Kese tells Vic...