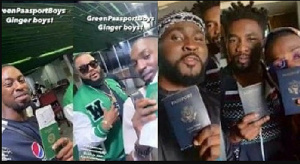 During their trip to Dubai, Pere, Michael, and Boma showed off their American passports in a video as they apparently shaded colleagues with the Nigerian passports.

This passport trend from the former housemates came as a result of the rumour that some of them were asked to go return home due to paper issues.

Reacting to the shade, Saga alongside Emmanuel, Jaypaul, and Whitemoney decided to respond to the video by showing off their Nigerian passports.

Saga noted that the only passport they know is the ‘Greenland’ as they all raised their Nigerian passports.

They called themselves the ‘Green Passport Boys’ or GG Gang.

Watch the video below.

Confessions of the Brain: Singer talks career after school

Was Robert Mensah’s death caused by a prophecy?