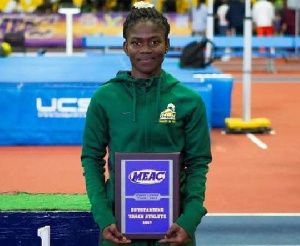 Martah Bissah suspended from the GAA

Bissah accused the GAA of extortion

Mateh Bissah has appologied to the GAA

Bissah was suspended indefinitely in 2016 for claiming that the GAA demanded money from her while working on a scholarship to the United State after her impressive show at the Youth Olympics in China in 2014 when she won gold.

The association led by Professor Francis Dodoo found the accusations insolent and demanded an apology before lifting the ban.

The US-based athlete eventually issued the long-awaited apology to the GAA on Wednesday, November 24.

However, Bissah’s guardian has said the content of the letter was written by Prof Twumasi and thus he, Kwaku Nimo, had no knowledge about it.

“To be very frank with you, I have no knowledge about this letter. The truth of the matter is that Professor Twumasi and his people at the NSA wrote the letter for Martha Bissah to sign, and that has been confirmed by Martha Bissah. Martha has confirmed that they gave her the letter and she signed it. This also has been confirmed by the Personal Assistant to the National Sports Authority boss on telephone” he told Starr FM.

Nimo continued that Bissah was forced to sign the letter.

“They convinced Martha Bissah to sign the letter. In our visit, he gave Martha Bissah a thousand Ghana Cedis so I believe Martha has been compromised. In my conversation with Martha last night, Martha claims and still says she stands by what she said about Francis Dodoo and the GAA,” he added.

Dong Bortey is my greatest Hearts of Oak player

I had no boots when African Talent Football Academy approached me