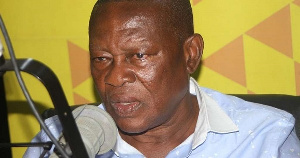 A Former National Organiser of the National Democracy (NDC), and Board Chairman of Bofoakwa Tano FC, Mr. Yaw Boateng Gyan, has urged the Ghana Football Association (GFA) and government to speak to parents of young Ghanaian footballers who are doing very well nationally and internationally to convince their children to play for the senior National Team, Black Stars.

Despite having a solid team, he was of the view that there were very good players out there who could make a positive impact on the national team but had not been called to join the team.

According to him, even if it has to take the President to call them, he has to do it for the betterment of the team.

“We have a lot of players and the FA has to make a move. If we have to get people to go and talk to them we have to do it. Even if the government has to come in and the President himself has to take a phone and call the families of those guys and talk to them, he has to do it,” he said.

He continued that, “I heard Asamoah Gyan has spoken to some of them, fine. If we get some of these old guys in there, they can do something like what Roger Miller did but these boys are young blood and energetic and I feel when they come, it will help the team.”

Although he does not know what move the GFA has taken concerning these guys, he said he was willing to take it up to speak to some of them even if he has to travel, urging the GFA to make them know what steps they are taking in that regard.

He noted that the President spoke to Callum Hudson-Odoi and after that, the England Team called him but he did not go because he might be considering playing for Ghana.

“We do not have to leave it there, we have to continue talking to them because all these boys are very good,” he said.

‘Mzbel’ Drops Throwback Photograph of Diamond Appiah – Alleges She Was A Drug Seller...

I needed to depart Man Utd and return to Arsenal soon after my first...