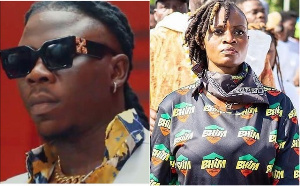 Ayisha is a top fan of Stonebwoy

Ayisha says she is not beefing the Stonebwoy

Ayisha Modi, a top fan of dancehall musician Stonebwoy, has shot down claims of a misunderstanding between them.

According to Ayisha, best known as ‘She Loves Stonebwoy,’ there is no cause for alarm and has advised fans to disregard any publication that seeks to suggest bad blood between herself and the award-winning singer.

Fans were broken by the purported separation following their decision to unfollow each other on the photo and video sharing platform, Instagram.

Also, Ayisha, who is regarded as a Stonebwoy loyalist before her recent post, had for almost 32 weeks not made a single post on his good friend, Stonebwoy despite the release of his new single, ‘Greedy Men’.

The move was quite unusual causing fans to suspect a fallout; She Loves Stonebwoy has finally cleared the air.

In a post sighted by GhanaWeb, Ayisha shared an earlier publication by the website on how fans reacted to her recent congratulatory message to 1GAD.

She wrote: “We are not beefing.”

The Most Flaunted Baby in Ghana – 5 Times Tracey Boakye Put Too Much...

How can you ban shareholders of a club