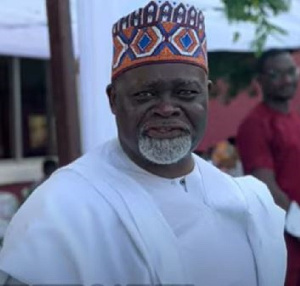 Azumah Nelson’s iconic status in Ghana and beyond is without question. The boxing hall of famer has since his days of active boxing been an ambassador for the country, bringing the world’s eye to the country with his achievements.

For those who lived his hey days, his exploits on the world stage was one of a handful of things that brought the country pride.

Azumah’s fame and worldwide recognition have been built on outstanding feats in boxing but unknown to many, he has a hidden talent.

This talent was brought to bear during the wedding ceremony Dorinda Azumah last weekend.

There were cheers and applause from the gathering as they admired the moves by Azumah Nelson.

Nana Ama McBrown explains why her husband manages her

There will be no one week celebration for the late Nana Ampadu – Akosua...

Sarkodie is far too proud and arrogant

Thanks for your company – Akufo-Addo directs retirement of Domelevo