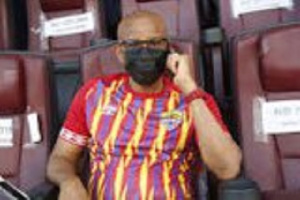 Mustapha Hamid in a Hearts of Oak jersey

In Ghana, there is an unwritten rule or a stereotypical view that the political allegiance of every citizen is on the lines of either the New Patriotic Party or the National Democratic Congress.

The political duopoly also manifests in football with Hearts of Oak and Kumasi Asante Kotoko being the preferred clubs of almost every Ghanaian.

So in Ghana, you belong to NPP or NDC politically and support Hearts or Kotoko football wise.

A careful watch of the two glamorous clubs in the country shows that people’s choice of political allegiance impacts on the club they support.

Within the public space, most NDC persons appears to tilt towards Hearts of Oak whiles most persons who identify with NPP support Kumasi Asante Kotoko.

GhanaWeb brings you a list of five members of the governing NPP who are known to be supporters of Accra Hearts of Oak.

The Minister of Transport is a known member of the Phobian family and is said to have held an executive position in the Hearts supporters’ family.

A former National Organiser of the NCC, Mohammed Alhassan in an interview with the Graphic Sports yesterday revealed that Kweku Ofori Asiamah held the PRO position of the National Chapters Committee for eight years.

“Kwaku Ofori Asiamah, for instance, was once the Public Relations Officer (PRO) of the NCC for eight years. It was during that period that Hearts of Oak won the six Premier League trophies, the CAF Champions League and the Super Cup.

The former Railway Minister was sent a congratulatory message by supporters of Hearts of Oak when he was nominated in the first term of Akufo-Addo administration.

The NCC commended him for living up to the true meaning of the club’s ‘Never Say Die’ motto. He is also the Member of Parliament for Essikado-Ketan in the Western Region.

The former Minister of Information has not hidden his love for Accra Hearts of Oak. He is an avid supporter of the club and followed them keenly last season.

The Chief Executive Officer of the National Petroleum Authority has on multiple occasion flexed the Hearts Oak of colors.

He was at the stadium when Hearts defeated Kotoko in last season’s Ghana Premier League.

The former Member of Parliament for La Dade-Kotopon is not just a mere supporter of Accra Hearts of Oak, he is a member of the club’s management team.

Despite being politician, Odotei’s is known mainly for his connection to Ghana football, Hearts of Oak to be specific.

He recently led to the team to the presidency to showcase their trophies to President Nana Addo Dankwa Akufo-Addo.

Aziz needs no introduction when it comes to Hearts of Oak. For decades, he has been a face of the club.

He has risen through the ranks, from being a follower to a management member of the club.

He is currently the National Nasara Coordinator of the governing New Patriotic Party.

The NPP founder is a board member of Accra Hearts of Oak and is a known loyalist of the rainbow team.

His asssociation with Hearts of Oak transcends decades and has played various roles for the club.

In a recent interview with GhanaWeb, he detailed his connection with Hearts and how gave an insighful history about the formation of Hearts of Oak.

Nii Teiko Tago is a known member of the New Patriotic Party and a presidential staffer.

Nii Teiko has in various social media posts professed his love for Accra Hearts of Oak.

He was present when Hearts defeated Kotoko last season.