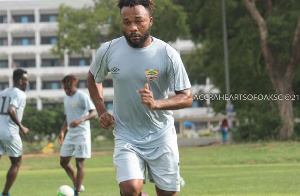 Hearts of Oak midfielder Gladson Awako has rendered an unqualified apology to his teammates, supporters of Hearts and all people who have the team at heart for his actions.

The player went AWOL barely weeks after signing for the Ghana Premier League champions for an unknown reason but has pleaded for forgiveness.

Awako on Tuesday morning began training with the Hearts of Oak youth side Auroras at the St Thomas Aquinas Park and is expected to join the main team if he regains his fitness.

He went AWOL and finally returned to the team after an intervention from the Teshie Youth Chief, Original Nii Martey Laryea I.

The midfield maestro joined the Ghana Premier League champions from rivals Accra Great Olympics barely three months ago on a two-year deal but decided to run away from the club for reasons best known to him.

“In fact, I must say a very big sorry to my teammates for whatever has happened, I pray they forgive me, am sorry,” he told Hot FM in an interview.

“I must say that I have regretted all that has happened and hope all including journalists will forgive me and be supportive to my career,” he said.

Re: Akufo-Addo can’t even shower in presidential jet

How a young woman, Kuukua Eshun, is drawing attention to sexual violence through film