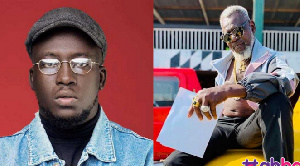 Scores of Ghanaian comedians have stormed SDK’s home to commiserate with his family after he lost his father.

It can be recalled that SDK earlier took to social media to announce the death of his father on November 24, 2021.

SDK’s father, while alive, played an active role in his comedy skits and featured in several episodes together with his wife.

Since his father’s demise, SDK has received countless well-wishes from the Ghanaian entertainment fraternity.

Scores of celebrities have taken to social media to commiserate with the popular comedian.

But in a new development, his colleagues have stormed his residence to pay special homage to him.

The likes of Comedian Waris, Nana Made in Ghana, and many others were captured in a viral video entertaining SDK’s family.

How Nana Ama McBrown Pitied Bulldog and Gave Him $1,000

AshantiGold vs Hearts of Oak