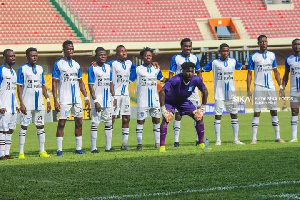 Real Tamale United preserved their unbeaten home form in the Ghana Premier League on Sunday with another victory over AshantiGold SC at the Aliu Mahama Stadium.

The Pride of the North recorded a 2-0 win against the Miners to make back-to-back home wins in the matchday five-fixture in Tamale.

RTU head coach Shaibu Ibrahim Tanko made a couple of changes to the team that were mauled 5-1 by Aduana Stars in the last round in Dormaa Ahenkro.

Yaw Osei was preferred to Emmanuel Essandor in the goalposts with Stephen Badu Dankwa making way for Mathew Abayese.

AshantiGold interim coach Thomas Duah altered the team that were 2-0 victors against Hearts of Oak in Obuasi with four changes.

Dennis Votere was in the goalposts to replace injured Kofi Mensah whereas Stephen Nyarko earned a starting place for the first time this season in place of Eric Esso.

Amos Kofi Nkrumah and Isaac Opoku Agyemang were also replaced with Abdul Salam and Kennedy Ashia in the starting lineup.

The home side got the first goal of the match in the 38th minute with Nketia netting his maiden goal in the premiership with a wonderful strike.

RTU doubled their advantage in the 59th minute through defender Yussif Mohammed Nurudeen who scored with a powerful header.

It was a deserving win for the premiership returnees.

MTN FA Cup: ‘The final against Ashantigold won’t be easy’