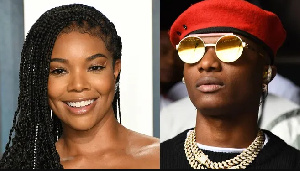 From his entrance to his performances, Wizkid left fans wanting more as he thrilled audiences to a spectacular show at the O2 Arena in the United Kingdom.

Among the guests present was Hollywood actress, Gabrielle Union who paid a visit to the singer backstage.

The two stars had a warm hug as she expressed her excitement at being present for the show.

There were amazing performances from various stars including American singer Chris Brown, Tems and Buju.

Wizkid on Sunday held his ‘Made in Lagos’ concert at the O2 Arena in London.

The event was attended by several A-list entertainers in the industry.

Watch the video below;

I’m not going to prosecute folks on the foundation of mere allegations – Nana...

We’re compelled to use tricycles to convey Covid-19 infected corpses for burial – Environmental...