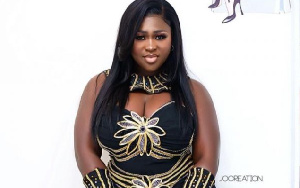 Popular Ghanaian singer, Sista Afia has recounted an instance where she once sold ‘waakye’ in the United Kingdom to make ends meet.

Sista Afia who used to reside in the U.K together with her parents sometime in 2012, established that it was through the sale of food that she first chanced upon Sarkodie.

Narrating the encounter, Sita Afia said she had to struggle her way through a large crowd just to take a picture with Sarkodie.

“I was first selling waakye in the UK and I met Sarkodie at the market. I struggled my way through the crowd of people gathered around to see him and I managed to meet Sarkodie. I only wanted one thing. I only wanted to take a picture with him. This was in 2012. I recently did a throwback of the picture and Sarkodie even retweeted it,” she stated in a discussion on UTV’s United Showbiz.

She has also shared several stages with the rapper including ‘Rapperholic’ and Sarkodie’s ‘Black love’ album concert.

Are Efya And Wale Together?- Fans Ask With Concern After A Video Of Them...