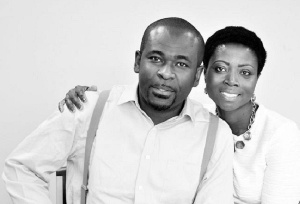 Colinwud has launched a challenge dubbed ‘Show Us Your Glory’ in their bid to promote their latest single.

Already, some persons have begun participating as they record a video of themselves performing the new release titled ‘Show Us Your Glory’.

Released on October 10, 2021, the slow-tempo song was composed by Albert Collingwood. It features Morris Babyface and Cassie Amoako.

The piece was produced by Shadrack Yawson and comes with a music video that was directed by Kwame Owusu Ansah, shot by Authentic Media and edited by Kwame Agyei.

Colinwud is made up of Albert and Grace who have been married for years.

The couple has decided to propagate the word of God, influence lives positively and also win souls for the Kingdom.

According to Colinwud, participants who excel will be rewarded.

“You just need to tag us on social media,” said Albert.

Partisan politics is an imposition and a borrowed society

The tragic dying of Alfred Kotey, a gorgeous fighter and target of boxing’s deadly...

Abdul Rahman Harruna-Attah: Religion in Ghana – A letter to Akufo-Addo and Bawumia