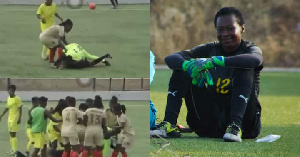 Soccer Intellectuals goalkeeper, Selina Abalansa has been caught on camera assaulting a referee during a Women’s Super Cup game at the Madina AstroTurf Park.

Though it is unknown what triggered the action by the goalkeeper, viral video captures Selina Abalansa quickly rushing to the referee and punching her to the ground seconds after Prison Ladies scored the second goal.

The other players and the security officials at the match venue quickly stepped in to separate the two as the goalkeeper was on top of the referee.

Prisons Ladies defeated Soccer Intellectuals 2-0 at the Madina AstroTurf to progress to the semi-finals of the competition.

Erroneous Alternative! Who Adviced Efya To Rock A Pyjama Costume To A Concert?