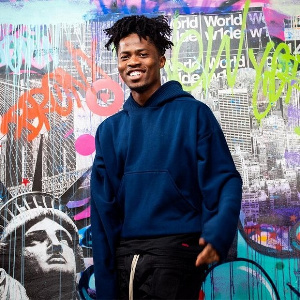 Ghanaian rapper, Kwesi Arthur, has shown off his dancing skills to prove he is worth more than his voice.

In a video shared by Dancegod Llyod, the ‘Grind Day’ hitmaker has proven to Ghanaians he is more than capable to save his life if dancing depended on it.

The rapper was captured dancing to ‘celebrate ft Teni’ at the ‘Dance With a Purpose’ (DWP) Academy headed by Dancegod Llyod and AfroBeast who are both professional Ghanaian performers.

One will say Kwesi Arthur looked confused at a glance but the artiste who wore a pair of sneakers, a pair of jeans and a hoody to match, easily synched with the dancers who performed to his song.

In another video, shared on the same day November 30, the artiste encountered media personality, Nana Ama McBrown who couldn’t hide her excitement after running into each other.

Nana Ama McBrown jokingly warned Efia Odo to watch out because she was a bigger fan of the singer.

Knowing how crazy Efia Odo’s love for Kwesi Arthur is and would go to lengths to defend that, Sarkodie also revealed on Twitter he was Kwesi’s biggest fan while poking fan at the socialite.

He also tagged Efia Odo in his tweet to let her know that her place was taken and in response, she wrote ‘NEVER!’

That was good enough an answer from her to prove she wasn’t giving up on Kwesi Arthur.