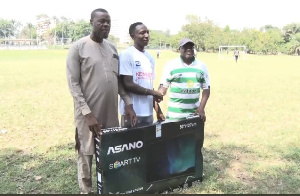 Ghana Premier League side King Faisal have rewarded their player of the month Osman Ibrahim with a brand new 50 inches Asano smart TV.

The on loan Kotoko striker has been in blistering form scoring three goals in the month of November while providing two assists for his side.

King Faisal’s start to the season has been very impressive, a far cry from the relegation form they displayed last season in the league.

They have won three matches drawn one and lost one in their five matches played so far in the Ghana Premier League and lying second on the league log.

Club sponsors Kennedy Digital Satellite presented the player of the month November winner with a giant Smart TV at the club’s training ground.

King Faisal and Kennedy Digital Satellite have a 2 year sponsorship deal worth ¢840,000 which sees the home appliances shop award give the club cash and electronic products.

The award was presented to Osman Ibrahim by King Faisal Vice President Alhaji Kamil after the team’s training session on Thursday.

Osman Ibrahim will not be eligible to play against his parent club Kotoko on Sunday due to their contractual agreement with Kotoko.

Examine Out Mzbel’s Considerate Reply To Afia Schwar After Labeling Her A Poor Mom-...

Benedicta Gafah wore the dreamiest Kente outfit ever for her traditional...