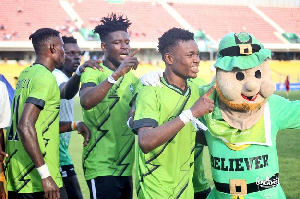 Dreams FC return to their Theatre of Dreams turf in Dawu on Sunday to face Bibiani Gold Stars FC who have not been pushovers so far.

The Greens should have recovered from last week’s 3-1 fall at Bechem United in a match in which they took the lead but allowed the hosts to turn things around.

They are now with a win in two matches but count on the Still Believe Lads to rise up to the occasion at home.

Last week was the first time Issahaku Fatawu failed to register his name on the scoresheet after netting in their previous games.

The on-loan Ghana international has been on fire and a lot will be expected on Sunday.

Strike Agyenim Boateng has also been in good form and he can cause problems for the visitors on a good day.

Gold Stars, newly promoted, are sixth on the table after five matches and are without a win on the road this season.

They managed to hold Medeama to a 1-1 draw in Tarkwa and were beaten 2-1 at Elmina Sharks after taking the lead.