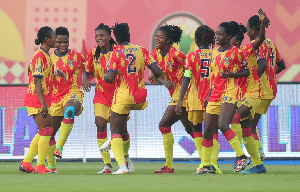 Hasaacas Ladies have qualified to play in the finals of the maiden edition of the Women’s Premier League Super Cup after beating rivals Ampem Darkoa Ladies 3-0 in the semi-finals.

The CAF Women’s Champions League finalists went into the game without six key players who are on international duty with the U-20 National team, Black Princesses.

Forward Success Ameyaw opened the scoring for the Champions in the 26th minute to give Hasaacas Ladies the lead.

Ten minutes later, Veronica Appiah found herself behind the defense of Ampem Darkoa and hit a low shot to the right bottom corner for the second goal for Hasaacas Ladies minutes before the break.

Success came through with the second of the day – her third goal of the competition to put the game beyond the reach of Ampem Darkoa Ladies who twice lost to Hasaacas Ladies in the final of the Women’s League and Women’s FA Cup.

Hasaacas Ladies will now wait for the winner of the game between Lady Strikers and Prisons Ladies for the final on Sunday.

Don’t demand money to avail yourself for 2021 census – Statistical Service in Northern...

Stonebwoy, Blitz The Ambassador announced as members of Recording Academy