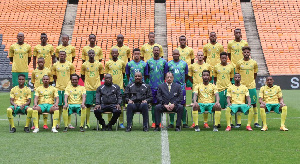 South Africa will not participate in the 2022 World Cup

South Africa will stop at nothing to prove they were robbed against Ghana in 2022 World Cup qualifier as they head to Court of Arbitration for Sport to challenge FIFA’s ruling on their protest.

FIFA on Friday dismissed South Africa’s protest seeking a replay of the match which they lost 1-0 to end their hopes of reaching the global showpiece in Qatar next year.

“The protest lodged by South Africa has been declared inadmissible by the Disciplinary Committee as it did not meet the requirements foreseen under art. 46 of the FIFA Disciplinary Code and art. 14 of the Regulations of the Preliminary Competition of the FIFA World Cup 2022,” FIFA said in a statement to Ghanasoccernet.com on Friday.

“The decision is subject to appeal,” FIFA added.

Amid wild allegations, including a Ghana Football Association (GFA) official meeting Senegalese to meet centre referee Maguette N’Diaye weeks before the game, South Africa confidently lodged the protest and were convinced their wish would be granted.

With the protest thrown out, South Africa are set to head to CAS. Even before the ruling, Safa CEO Tebogo Motlanthe hinted it.

“I think as South Africans, the mistake we have made is that everyone thought the decision would be announced on November 23,” Motlanthe told Sowetan Live an anxious nation waits for Fifa’s answers.

“There are a lot of things they are dealing with. If they don’t give you a good reason, you can still go and challenge the matter with CAS. So, they’d rather do their work and we give them the space.”

South Africa needed a draw to qualify for the play-offs but lost 1-0 with the Black Stars being awarded a penalty, which has split opinions.

While some claim it was a correct decision, others, South Africans in particular, insists it was a soft call and it has formed the basis of their allegations and subsequent protest.

A visual history of space-age fashion