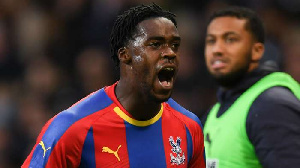 Crystal Palace manager Patrick Vieira responded that he was pleased when asked about the performance of Jeffrey Schlupp against Leeds United.

Schlupp was back in action for Tuesday’s Premier League match after being left on the bench in the last game against Aston Villa.

The Ghanaian played 80 minutes and did his best, but unfortunately, Crystal Palace lost 1-0 as they conceded a 94th-minute penalty.

It was the first time in many games that the injury-prone midfielder had featured as a starter and Vieira assessed his performance at the post-match interview.

“I was pleased with his discipline and I was really pleased with the drive that he brings to the teams when he got the ball at his feet,” Vieira said.

Schlupp has struggled with injuries this season, resulting in 11 appearances in all competitions and has scored one goal.

Mozambique’s jihadists and the ‘curse’ of fuel and rubies