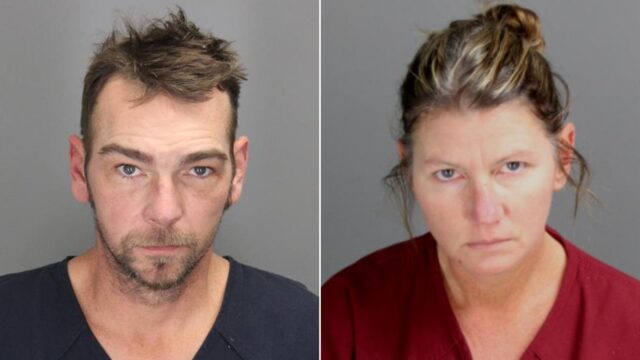 A tip led police to the parents of Ethan Crumbley, the suspect in the Oxford High School shooting, who were arrested in Detroit on manslaughter charges, officials said Saturday.

James and Jennifer Crumbley were found on the first floor of an industrial building near where authorities had located their car shortly before they were apprehended, Detroit Police spokesperson Rudy Harper told CNN.

“They appeared to be hiding in the building,” Detroit Police Chief James White said during a news conference early Saturday morning. They were “very distressed” after they were detained, the chief said.

The Crumbleys were charged Friday with four counts of involuntary manslaughter over the shooting their 15-year-old son, Ethan, is accused of carrying out on Tuesday, when four students were killed and seven others wounded at Oxford High School.

Law enforcement considered the couple fugitives after they missed their arraignment that was scheduled for Friday afternoon.

CNN has reached out to the couple’s attorney, Shannon Smith, who had earlier stated that the Crumbleys had left town for their own safety and intended to turn themselves in voluntarily.

But White pointed out that there was no sign the Crumbleys wanted to be found. He added the couple was assisted in getting inside the building, a matter which may trigger charges.

“This isn’t indicative of turning themselves in, hiding in a warehouse,” the police chief said.

They were transferred to Oakland County Jail, where their son is also held, and are expected to be arraigned later Saturday morning.

They withdrew $4,000 from an ATM on Friday, official told CNN

The US Marshals Service was helping local authorities search for the couple and had offered a reward of up to $10,000 for information that could lead to their arrest.

Ultimately, Detroit police made the arrest after a local business owner saw a woman standing near “the suspect vehicle” in his parking lot and called 911, according to a statement to CNN from Undersheriff Michael McCabe with the Oakland County Sheriff’s Office.

“After an extensive search by DPD including Detroit K-9 units both of the fugitives were located and arrested by DPD,” McCabe said.

Prosecutors had worried about the couple escaping because they didn’t have ties to their community, and officials had trouble locating the Crumbleys once their son was being arraigned, a law enforcement source told CNN on Friday.

The parents also withdrew $4,000 from an ATM in Rochester Hills, Michigan, on Friday, a law enforcement official told CNN. Rochester Hills is about 10 to 15 miles from Oxford.

Law enforcement were tracking the couple’s whereabouts by cell phone pings but that signal had dropped because the couple’s cell phones were turned off, the official said.

Ethan Crumbley has been charged as an adult with terrorism, murder and other counts in the shooting rampage at Oxford, which is located about 40 miles north of Detroit. Seven other people were wounded in the shooting.

The arrests come after officials revealed more information Friday regarding the circumstances leading up to the deadly shooting.

On November 26, James Crumbley bought the gun authorities believe was used in the shooting at an Oxford, Michigan, store with his son, according to Karen McDonald, the prosecutor who is leading the case.

Shortly after, his son posted a picture of a gun on an Instagram account and captioned it, “Just got my new beauty today. SIG SAUER 9mm” with a heart-eyes emoji, McDonald said.

Jennifer Crumbley also posted about the gun on social media, calling it “his new Christmas present,” McDonald continued. And his mother also took him to a shooting range the weekend before the shooting at the school, according to a law enforcement.

On Monday — the day before the shooting- – a teacher saw Ethan Crumbley searching ammunition on his phone and reported it to school officials, the prosecutor said.

Jennifer Crumbley did not respond to school officials when they called her about that conduct — but later that day sent a text message to her son saying, “LOL I’m not mad at you. You have to learn not to get caught,” McDonald said.

Then on Tuesday — the day of the shooting — a different teacher became alarmed after the alleged shooter had a drawing that showed a semiautomatic handgun pointing at the words “The thoughts won’t stop. Help me,” McDonald said.

Another section displayed a drawing of a bullet with the words “Blood Everywhere” written above it. Between the drawing of the gun and the bullet is one of a person who seems to have been shot twice and is bleeding, McDonald said.

“Below that figure is a drawing of a laughing emoji,” McDonald said.

Also found on the note, according to McDonald: “My life is useless” and “The world is dead.

“The parents were called for a meeting in the school with a counselor and their son, who had altered the illustration by scratching out the drawings of the gun and bloody figure, along with the words, according to McDonald.

The parents refused to take their son out of the school, and he was allowed back to class.

Later that day, according to prosecutors, Crumbley opened fire outside a bathroom, aiming at students in the hallway as well as those who were hiding in classrooms.

Easing of some Covid-19 constraints: A humble enchantment to the President

Mona Gucci claims she is an ‘Immigration Lawyer’