Actress Efia Odo has started that most citizens vote for politicians who tout the message of hope without knowing their true intentions.

According to the #FixTheCountry convener who has been vocal about the plight of the West Africa state, not much is being done by politicians who have been voted into high office.

Efia on countless occasions have called out the New Patriotic Party led by President Nana Addo Dankwa Akufo-Addo over what she terms as their poor performance in office.

Today, Tuesday, December 7, marks exactly a year since Ghanaians went to the polls to elect a new president as well as Members of Parliament for the various Constituencies.

December 7, 2020, presidential elections witnessed, Nana Akufo-Addo being given a second term in office by the good people of Ghana with their campaign message “4 More To Do More”.

The actress in her post noted that most politician never fulfil their promises and has therefore called on citizens to stop voting for leaders who know nothing about suffering.

“You can’t blame the people for voting for “hope”. These leaders come as sheep and end up behaving like wolves! Stop voting for liars and pretentious leaders who know nothing about suffering. We need to start engaging in conversation pertaining to our livelihood,” she wrote in a tweet dated December 7. 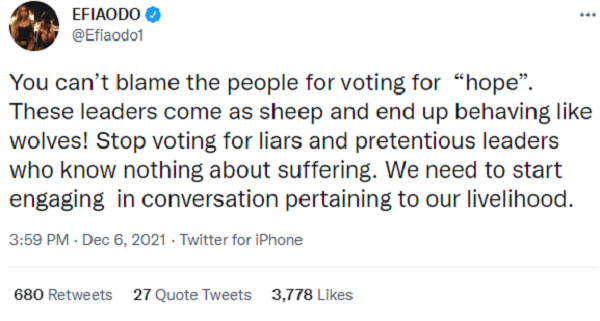 Nadia Buari Referred to as Out Following Tagging Beyonce That She Loves Her Currently...