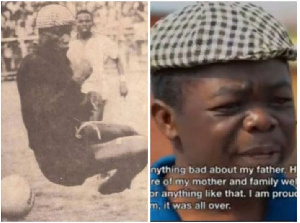 Kofi Antoh has lived with disability since birth

Kofi Antoh did not see his father, Robert Mensah’s heroics in the post nor did he lay in the arms that made a lot of unthinkable saves to earn the recognition as Ghana’s greatest goalkeeper of all time.

Antoh(meaning did not meet) although did not experience fatherly love while growing up, he has vowed not to exchange the only memory about his father, the iconic ‘Robert Mensah CAP’.

The legendary shot-stopper is easily remembered for his unique dressing during games. He wore a cap vertically every match he played in. Oppositions found it difficult to get past him when he is in full his amour.

Opponents referred to the cap as black magic-‘juju’ and as result tried to remove it from his head sometimes.

Antoh did not get to see all these moments because he was born on the day his father died.

Mensah was stabbed to death in 1971 during a brawl at a nightclub in Tema. His wife went through force labour upon hearing the untimely death of the Asante Kotoko and Ghana great.

Antoh due to his premature birth came out with a disability. He could not walk.

Speaking with Black Rasta in an exclusive interview, the 50-year-old said he would not trade the cap for his healing.

“If I was to sell this over a 50-years-old cap of a legacy, it would have long been done. Yes, I am disabled but it’s God who heals. I will not sell it. I am hopeful that I will be well.”

When Goalkeeper Robert Mensah was stabbed to death, his wife was six months pregnant. When she heard the news, she went into forced labour. The baby, Kofi Antoh is here.

Says he will not trade the cap for any amount though he has no legs to walk ????