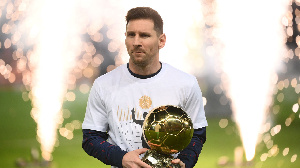 Rocky Dawuni was recently nominated for the Grammys

Messi and Gianluigi Donnarumma, both of PSG, who won awards at the Ballon d’Or were made to present their awards to the fans inside the Parc des Princes.

To celebrate their players, PSG shared a video of Messi and Gianluigi Donnarumma walking out of the pitch with Rocky Dawuni’s hit single “it’s time” being played in the background.

The Ghanaian reggae is eyeing to win the Best Global Music Album with his “Voice of Bunbon Vol.1” album released in April 2020.

Rocky Dawuni earned his first Grammy nomination in 2015 with his Branches of The Same Tree album.

Choose your males cautiously like the way you pick out your selfies – Juliet...