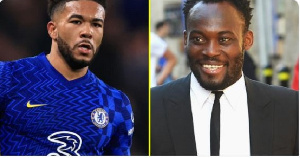 Michael Essien is arguably one of the best Chelsea signings in the last two decades as his dominance in midfielder and versatility was one of his biggest attributes throughout his stay in the English Premier League.

Reece James on the other hand has been a cult hero for Chelsea since making his debut three years ago and his ability to play in any of the defensive roles has caught the eyes of Owen Hargreaves and Rio Ferdinand.

“I loved so many of my players but I think Michael would be on the podium for sure,” he said in a recent interview. He [James] reminds me of Essien playing in there. “He’s the most complete right-back (in England). He can play (in midfield) without question.”

“Powerful. He can cover ground, play on his own, get up against people one-vs-one, he’s such a great player,” Hargreaves told BT Sport.

“We spoke about right-backs in this country with huge talent dictating games – he went into midfield and looked like he’d been playing there all his life. James is among the top right-backs,” Rio Ferdinand added.

Michael Essien joined Chelsea in the summer of 2005 from French giants Olympique Lyonnais after winning the French Ligue 1 player of the year award the season.

He won eight major trophies including the UEFA Champions League in 2012 in his nine stay with the Pride of London.