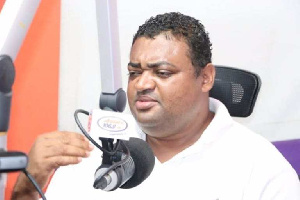 Former Deputy Sports Minister under the NDC government, Joseph Yamin has urged the incumbent government to reconsider investing $25million in the Black Stars for the 2021 AFCON and World Cup.

According to him, the Sports Ministry’s budget for the whole year does not even amount to the $25million which is been solicited from Corporate Ghana and some government institutions for the Black Stars.

Yamin, stated that the $25 million could serve as a financial boost for the whole Sporting industry instead of wasting it only on the Black Stars.

Speaking in an interview on Wamputu Sports with Odiasempa Kwame Oware, he advises the incumbent Sports Minister Mustapha Ussif to take a relook at the decision.

“It doesn’t make sense to raise $25 million for the Black Stars when the whole budget for the Sports Ministry is not up to that amount”, he said on Happy 98.9FM.

“The Sports Minister should rather think and raise that $25million to cater for the whole Youth and Sports Ministry”.

I have proven critics wrong – Fabio Gama reacts to his performance

I Acquired Expecting with Maxin By way of In Vitro Fertilization – Nana Ama...