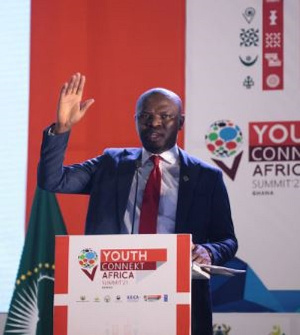 play videoMustapha Ussif, the Minister of Youth and Sports

Mustapha Ussif, the Minister of Youth and Sports, has assured of Ghana’s preparedness to stage the 2023 African Games.

Speaking at the launch of mascot and logo for the competition, Mustapha Ussif promised that the government will commit adequate resources to ensure that the sports festival becomes a success.

The Sports Minister expressed confidence the tournament will be a great advertisement of the country’s sporting and culture heritage and leave undeletable memories on the minds of people.

“The ceremony taking place today is a clear message to the whole world that Ghana is ready, willing and capable of hosting and organizing a benchmarking event which will leave a lasting legacy not only for Ghana but for the continent of Africa.”

Mustapha Ussif gave further details about the mascot and logo and what informed the decision of the ministry and Local Organizing Committee to adopt the eagle as the symbol of the competition.

“The wisdom behind the Mascot is that the eagle symbolizes courage, strength, focus and immortality.

“We have taken the posture of the eagle and success is our only option. It is against this background that the Ministry in collaboration with the LOC settled on ƆKODIƐ – the Eagle.”

Ghana earned the right to stage the competition in 2018 after beating Egypt.

There have been uncertainties about the country’s commitment to organizing the competition following supposed delays in works on the Olympic Stadium.

The government has however assured consistently the facilities will be ready for the competition.

Funny Face bounces back to having fun with children