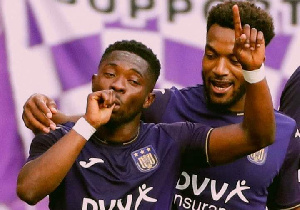 Francis Amuzu was among the goalscorers as Anderlecht played to a 2-2 draw with Club Brugge in Sunday’s Belgian top-flight encounter.

The midfielder came from the bench to find the net, nonetheless, the Purple and White only picked a point against Philippe Clement’s men.

Unbeaten in their last six matches in all competitions, Anderlecht travelled to the Jan Breydel Stadium with the ambition of defeating their hosts – who subdued OH Leuven last time out.

However, it was Club Brugge who took the lead in the ninth minute courtesy of Charles De Ketelaere.

Following a pass from Noa Lang, the Belgian midfielder outmuscled goalkeeper Hendrik van Crombrugge to tap into an empty net.

That goal slowed down the visitors who missed numerous scoring opportunities.

Before the half-time break, Lang hit the side-netting and Van Crombrugge had to make a save on a shot and header from Hans Vanaken.

Anderlecht’s only chance of restoring parity came before then, albeit, Christian Kouame’s shot was easily gathered by goalkeeper Simon Mignolet.

The second half got off to a flying start with manager Vincent Kompany ringing changes that saw Amuzu replace Yari Verschaeren and Benito Raman for Joshua Zirkee in the 46th minute.

In the 73rd minute, Amuzu equalised for his team. The Black Stars hopeful collected a pass from Lior Refaelov, cut inside and curled the equalizer into the far corner of Mignolet.

With five minutes left on the clock, the home team earned the equaliser after Ruud Vormer set up Hans Vanaken.

Another Daughter Of Osei Kwame Irrespective of Pops Up – Photographs

I Did Not Sleep Around For My Wealth But Worked Hard – Salma Mumin...