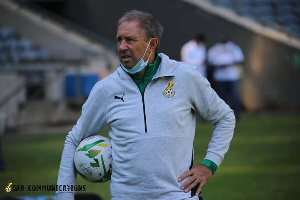 Black Stars coach Milovan Rajevac has said his team will strive to win the 2021 Africa Cup of Nations.

Milo as he is fondly called on Tuesday, December 21, 2021 said he will not brag about winning the tournament but can promise Ghanaians that the team will give off its best in the tournament.

Ghana have not won the AFCON since the 1982 edition where they won it in Libya.

The team is determined to the end drought in Cameroon and Milo has named 30 players from which he will pick 28.

The Black Stars are expected to commence camping in Doha, Qatar for a 17-day training.

At 35, Martha Ankomah Is Even now Waiting around On God To Give Her...

GFA calls on golf equipment to occur for their bibs