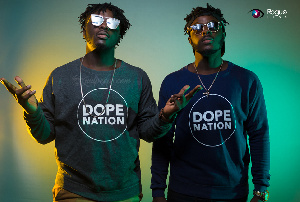 DopeNation’s performance at EL’s Bar 6 concert was rudely interrupted when one of the DJs stormed the stage, grabbed their microphones, and halted the performance.

Unclear what led to such an act, reports say that the Afrobeat music duo was performing poorly on stage and this somewhat angered the DJ.

B2 and Twist had no choice but to walk off the stage after the microphones were seized and this caused chaos at the event.

The audience on the other hand was thrown into a state of confusion after witnessing the ‘ruthless’ manner in which the artistes were treated.

Chancing upon the video which has since made waves on social media, Ghanaians have condemned the DJ for rudely interrupting the twins’ performance.

DopeNation was among artists billed to perform at EL’s Bar Concert held at Coco Vanilla in Accra.

There were performances from Edem, Joey B, Mzvee, and many others.

I learnt this happened last night at @ELgh_ Bar concert, if what am hearing is true then @1RealJoeyB you no try! n @kreptismenace u have no right to do wat am seeing DopeNation?ref_src=twsrc%5Etfw”>@GhDopeNation did well dem nor retaliate. #BarConcert @ELgh_ solve this issue dopenation be ur boys pic.twitter.com/7XXKyt0Nrn

Paa Kwesi Schandorf: The Russia-Ukraine crisis; all you need to know

‘Ghana Is Cursed With Gluttons We Call Leaders In This Country’ – Kwesi Arthur...