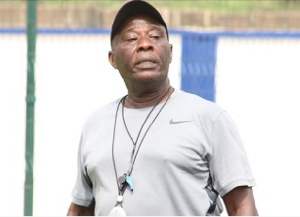 Coach for Accra Great Olympics, Daniel Annor Walker has charged striker Maxwell Abbey Quaye to take advantage of his recent call up to the Black Stars to showcase his abilities as a prolific forward.

The Accra Great Olympics attacker was named among four other Ghana Premier League players in the 30-man provisional squad ahead of the 2021 African Cup of Nations in Cameroon.

“My prayer is that, this shouldn’t be just a call-up but he should go there and prove why he is there,” he told Starr FM.

He went ahead to reveal the advice, hard work and determination on the part of Abbey Quaye which has amounted to the Black Stars invitation.

“I told him there was no prolific striker in the national team so I want him to work hard. He reports to training 30-35 minutes earlier and works hard and I think that has helped him score the seven league goals he has to his name.” He added.

152 Kgs Of Cocaine Disguised As Sugar, Busted At Tema Port