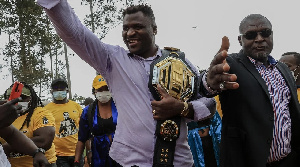 The Africa Cup of Nations (AFCON), which is scheduled to be held in Francis Ngannou’s homeland from January, is reportedly under threat after FIFA president Gianni Infantino was said to have backed European clubs pushing for a postponement.

With the rise of the Omicron Covid variant already causing a major rescheduling headache for leagues, there are concerns over dozens of players heading to Cameroon to take part in the month-long showpiece which has already been rescheduled from summer 2021.

A ‘small but highly influential minority’ within the Confederation of African Football (CAF) backed Infantino’s purported position during a Zoom call on Sunday, according to inews, although no conclusion is said to have been reached.

UFC champion and Cameroonian hero Ngannou is clearly not happy with what he believes is an unfair treatment of Africa.

“It’s so disrespectful to see how FIFA is trying to suspend the Africa Cup of Nations with some bullsh*t excuses while competitions have been taking place everywhere else,” the fighter told his Twitter following of more than 600,000.

“Cameroon is hosting the [tournament] this year and the whole continent is excited for it, since this is the only competition that honors all African players around the world. Please show some damn respect to our people.”

Superstars including Egypt’s Mohamed Salah and Naby Keita and Arsenal’s Thomas Partey are among the list of around 40 players from the Premier League alone who are expected to be joining their national squads.

Former Barcelona striker and newly-elected head of the Cameroon FA Samuel Eto’o vowed that his organization would “defend hosting this competition to the end.”

“If [Euro 2020] took place in the middle of the pandemic, with full stadiums in several cities in Europe and there was no problem, why wouldn’t AFCON be played in Cameroon?” he told Canal+.

“Or are you trying to say that like we’ve always been treated, we Africans aren’t worth anything so we have to put up with it? I don’t see why AFCON wouldn’t take place.”

CAF president Patrice Motsepe insisted he would be “with my wife and kids” to “witness this incredible competition” when the first ball is kicked on January 9.

“We are going to host, with the people of Cameroon, an exceptional tournament.

“It will be the most successful AFCON. We are ready to show the world the best of African football and African hospitality.

“This tournament is important for the people of Africa and I’m so proud and so excited with the work done.

“We have to believe in our people. We have to stop being the ones that lack confidence and are always expressing negative views of our people.

“All over the world, there are competitions with challenges – but we have to be more optimistic because sometimes we are over-critical of ourselves.

“This is the generation where Africans must believe in Africans. We can host a football competition that’s as good as you can see in Europe and the world.”