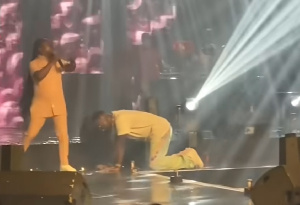 Ghana’s fastest rapper, Sarkodie went down on his knees for Obrafour while performing a song together at the Rapperholic Concert on December 25, 2021.

Sarkodie was on stage performing when Obrafour joined him on stage to perform one of their songs.

However, the moment Sark heard Obrafour’s voice he went down in front of the legendary rapper.

Sarkodie admitted to going confused after seeing Obrafour on stage.

Rapperholic concert is one of the biggest musical concerts held on Christmas Day by Sarkodie for his fans.

This years edition was massively attended and had a number of top Artistes passing through.

Ghana Wellbeing Service concerned in excess of decline in handwashing, sanitiser use

Retract and apologise for defamatory publication or face court action – Lawyers of Eugene...

Andre Ayew named in Championship Group of the Week

‘The corrupt hate people who speak the truth…they will kill you’ – KKD reveals...