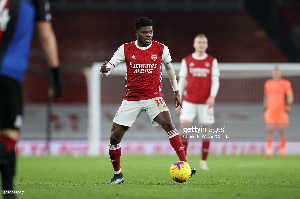 Black Stars midfielder, Thomas Partey has said that he is enjoying playing alongside talented teenagers and youngsters at Arsenal.

In a team that has some experienced players, manager Mikel Arteta has most often this season trusted the youngsters to get the job done.

On Sunday afternoon, the likes of Bukayo Saka, Emile Smith-Rowe, and Martin Ødegaard displayed outstanding form as Arsenal brushed aside Norwich City with a 4-0 win in the English Premier League.

After a game where Thomas Partey played in midfield, he told Arsenal media that it is exciting playing alongside these youngsters.

“We feel very happy. This is a game we really enjoyed. We have had a couple of games now where the team is doing very well and performing and I think this is what we have to keep doing,” Thomas Partey said.

The Black Stars midfielder added, “I think we are working harder, we are doing what we have to do, everyone is playing their role very well and that is the mentality that the coach wants us to play with and enjoy one the field and that is what we are doing.”

Unfortunately, Thomas Partey will be away from Arsenal next month when he joins the Ghana national team for the 2021 Africa Cup of Nations (AFCON) tournament in Cameroon.

Ghana music industry lacks support from its own – Possigee