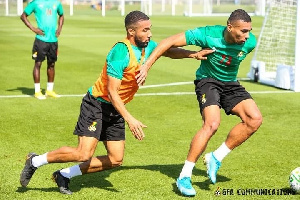 Training has begun in Qatar for the AFCON

The Black Stars of Ghana opened camp with nine players ahead of the start of the 2021 Africa Cup of Nations tournament.

The team arrived in Doha on Saturday to commence training ahead of the tournament.

The local contingent left Ghana on Friday together with four home-based players invited to join the squad for the pre-tournament camping.

The team will be in Doha for a period of three weeks to prepare for the Tournament scheduled for Cameroon from January 9 to February 6, 2022.

The Black Stars will play three international friendly matches in Qatar to give Coach Milovan Rajevac the opportunity to assess his squad for the Tournament.

Ghana are expected to play a yet-to-named club side on Tuesday, December 28, before taking on one of the Africa Cup of Nations qualified teams on Friday, January 1, 2022 in another friendly.

The team will wrap up their test matches against African Champions Algeria on Wednesday, January 5, 2022.

Ghana is in Group C alongside Morocco, Gabon and Comoros

The Black Stars will face North African side Morocco in the opening group C game in Yaounde on January 10.

Meanwhile, Ghanaian players in the English Premier League will join the team from January 3, 2021.

The players to have arrived in camp are

I can’t be sabotaged by a Socrate Safo who wears crooked spectacles – John...