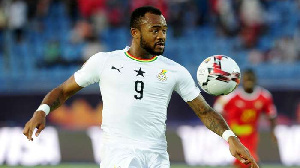 English Premier League side, Crystal Palace have been communicating with the Ghana Football Association over the release date of striker Jordan Ayew.

FIFA and CAF extended the departure day of English-based footballers from December 27 to January 3, due to the busy schedule of the English Premier League.

But Palace are hoping to have the in-form forward for a few more days.

“The three will go to AFCON. It’s a major tournament so we respect that and they’re very proud to play,” says assistant boss Osian Roberts.

“We are not sure when everybody is going to leave, there’s an ongoing discussion between the players and the federations and managers.

“We are still seeking clarification on when they will go. Some may go earlier than others.”

Ayew missed the Eagles’ defeat to Tottenham due to COVID concerns but he is expected to return before January 3.

Do not battle unlawful mining with illegality – Ken Ashigbey to govt